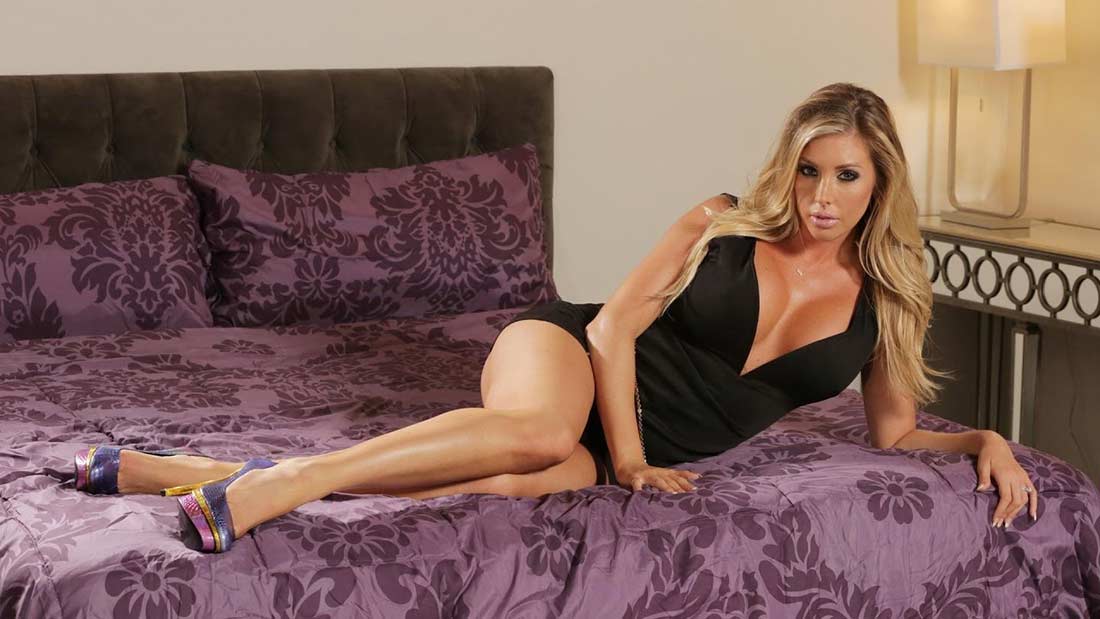 Axel Braun takes us once again into the world of fairy tales. This isn’t a Disney version though. In fact, this one teaches a number of things that Walt’s classic tale didn’t. I’ll outline those as we go. Samantha Saint plays Cinderella and is beautiful as always. We get to see her get busy twice and both scenes are worth watching. Her scene with her step sisters is one of the hottest lesbian romps I have seen in a long time. The finale with Prince Charming is also mighty fine. Veronica Avluv plays the wicked stepmother to absolute perfection. Her opening sex scene sets the bar very high. Carter Cruise and Penny Pax play Cinderella’s wicked stepsisters. They are plenty bitchy and always horny. After working over Cinderella, they share a big cock in a fantastic double blowjob. Julia Ann makes her way into the movie as well. As the fairy godmother, she pops in, waves her magic wand and then takes a wand herself. Hot scene with Tyler Knight for this living legend. The script is good and well acted by the whole cast. It is nicely shot and surprisingly hot sexually. The sex scenes stand up really well making it a very complete flick. It is fun, funny and hot, exactly what we would hope for.

Ever wonder how Cinderella came to live in a house ruled by her stepmother? This opening scene clears that up a bit. The King (Evan Stone) runs through a list of grievances he has for his bitchy wife. She spreads her legs and reminds him why he can’t resist her. He licks her pussy and she turns into a very hot talker right away. She looks really good busting out of her bustier with her legs kicking as his tongue makes her hips buck wildly. She turns over and sticks her ass in his face. After riding his face for a good long while, she takes his cock out and licks the head while twisting her hands on the shaft. This is probably why Veronica gets away with being so evil. What man in his right mind is going to be able to resist head this good? (Things the Disney version doesn’t tell us: Lesson One. The King can’t resist great head no matter how evil the bitch is.). Mounting up, Veronica rides really hard. She is great at the dirty talk and looks beautiful as she slams her hips down on him. They roll into spoon where his long cock has her squirting all over her fingers in no time. Evan keeps jabbing his cock into her pussy even as it gushes. He rolls her back onto her side and sticks it right up her ass. This is a really hot opening scene and has the bar set quite high already. She finally helps him explode using her hands and her mouth. Too bad it doesn’t end well for the King. (Things the Disney version doesn’t tell us: Lesson Two.)

The evil stepsisters (Penny Pax and Carter Cruise) convince Cinderella that she needs some experience if she wants to land a prince. They each grab a boob and start licking, sending the pretty blonde into fits of pure sexual euphoria. Having discovered something special in their leggy step sibling, the girls eat her pussy and ass until she is ready to crawl right out of her skin. This is a very fun scene with Samantha at the center of the action. She is super hot so the eye candy is fantastic. They make her hold a try of potatoes while they finger her meaty pussy and spank her ass. I don’t know if she learned anything about pleasing a man, but her slit gets a through work over. (Things the Disney version doesn’t teach us Lesson Two: Clit piercing and pussy shaving were as common as implants in this world.) I like both Carter and Penny so this is a hot scene all around.

Gus (Tyler Knight) takes Cinderella to see the Fairy Godmother (Julia Ann). She asks for a dress, a carriage and a whole lot o magic. In exchange for the magic, she demands something from Gus. Three guesses what it is. If you guessed a big hard cock, you guessed correctly. Julia Ann looks amazing as always and quickly gets to work sucking that dick. Her blowjob is fantastic of course and then she kicks back with her legs spread wide to give him a taste of her sweet goodness. Great leg shots here. Once they both get good and wet, he slips in from behind. (Things the Disney version doesn’t teach us: Lesson three Apparently a Fairy Godmother can turn a pumpkin into a carriage, but even she isn’t immune to STDs or unwanted pregnancies.) They get into doggy where he bags her hard enough to make the tits sway every time their hips collide. He decorates her boobs with a stream of sticky goo, paying Cinderella’s debt in full.

After the ball, the King’s guard (Will Powers) brigs the glass slipper around to see who it fits. The stepsisters are more than happy to share his cock if he will just put in a good word for them. These girls are great cock sucker and true whores which they probably learned from their mother. (Things the Disney version doesn’t teach us Lesson four: This family was the inspiration for all things Kardashian) Fantastic two girl blowjob here. They keep their mouths close together, working the cock and balls together like a perfect cock oral sex machine. He paints their pretty faces with a really nice load. Great little scene here with Carter getting her tongue coated in man chowder.

This is a fairy tale, so there has to be a happy ending. The Prince finally gets his dream girl and she proves that she has more than enough skill to please his cock. Samantha looks fantastic on her knees choking on cock. She warms up the head and then rams it to the back of her throat until she is good and messy. Great blowjob, especially as part of the final scene. He spreads her legs for a very short round of pussy licking before sticking his cock into her and going to town. Samantha rubs her clit, throws he head back and loves every stroke. They fuck, moan and kiss like this is the best fuck of their lives. He flips her over and has at it from the back. She spins around at the end, opening her mouth wide to catch the load he fires are her pretty face. Samantha sucks out the last few drops and licks up the rest from her fingers.