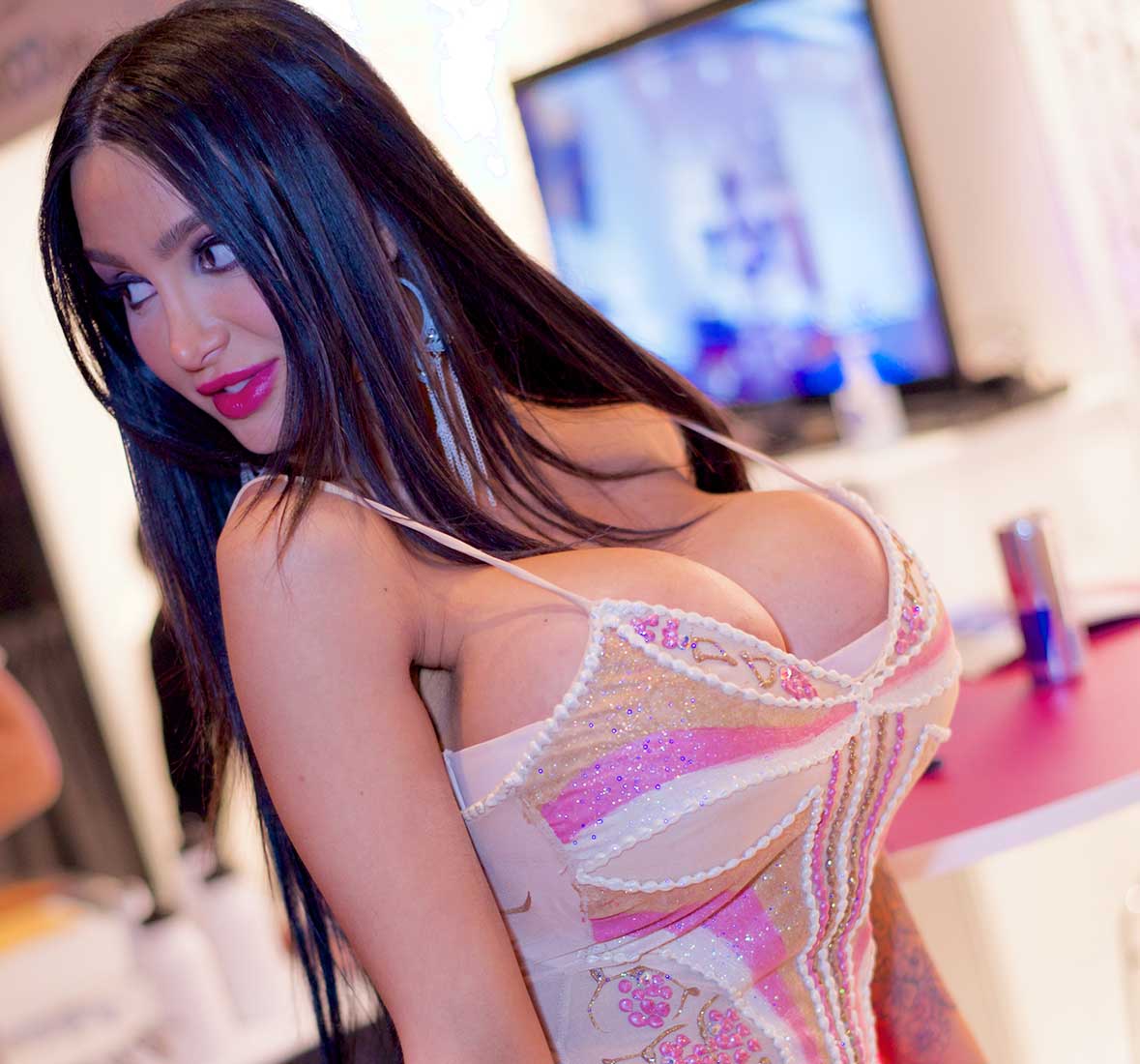 Manuel Ferrara is one of the few male performers able to truly enhance a scene, his work at Evil Angel and elsewhere showcasing how he adores ladies of all types. His latest release is an upcoming double disc compilation called All-Star Super Sluts, a great deal of fuck for the buck included with starlets such as Bonnie Rotten, Dani Daniels, Karlie Montana, and other high end hotties, in scenes lasting a combined 5+ hours from his previous works. Of interest is the inclusion of a single scene without Manuel, a popular tryst from his archives starring currently beleagered James Deen with beautiful Karlie Montana from Slutty and Sluttier 22.

Luna Star, Manuel Ferrara: Luna Star, the curvy Latina featured on the front cover, was up last as Manuel Ferrara described his desire to work with her as he drove in traffic. The camera was apparently mounted on the dash of the car and he was a bit scruffier than in most of the other scenes, cutting away quickly to show the sexy Luna in skimpy shorts and a tight black top in a hotel room, the gal posing for still shots in provocative ways. She looked professionally made up and her body was curvier enough for a guy like me yet still qualified as being “built for speed over comfort”, the frisky female posing more openly as her clothing flew off her frame. She kept solid eye contact and came across as purely sexual while putting on a show of masturbation for the director while he was behind the camera, her personality coming forth much more as he either set the camera down or participated more, the gal giving him some sensual head as she sucked his nuts and blew him, some oral on his taint (if not asshole) completing her oral checklist as she moved forward to jerk him off and aggressively ride his cock. While the levels of chemistry were not as pronounced as some of the previous scenes, they still seemed into each other, the lustful tryst continuing until she sucked the seed right out of his pecker. This left her with a semen goatee and his fluids spread across her chest, Luna teasingly giving him a few last licks and using both hands to stroke him while offering post coital head as he could be heard laughing from behind the camera, her showering off adding some strokable material too.

Dani Daniels, Manuel Ferrara: Dani Daniels, the total babe featured on the entire right side of the front cover, was up first on a large bed outside in a shaded area, her classic black lingerie looking great on her. She called Manuel Ferrara over to her where the couple flirted, her giggles showing how infatuated she was with the man and he was at a rare loss for words himself. Manuel got a lot of tease footage of her superior ass as she bent over and her panties rode up her juicy ass, pulling them halfway down for her to walk to the house with him following her. Dani stripped and then slobbed his knob in POV fashion, using her hand to gland motions as well as her mouth and eye contact to make for a wonderful oral experience. He then handed off the camera so he could get more footage of her ass and body, the couple moving into a 69 so he could gobble her gash as she throated his turgid pecker to the best of her ability. They then began various positions of slightly active vaginal penetration, some oral by both of them occurring from time to time as the intensity and enthusiasm grew in the chemistry filled scene. Dani was most active when mounting him in his lap but as much as he liked her hairy bush, his girth and length pushed her limits a bunch. This continued until she grabbed her legs and pulled them up to her head, Manuel blasting her crotch, torso, and face with genetic juice, the spooge satisfying her as she tasted the baby batter with a smile.

Karlie Montana, James Deen: Karlie Montana, a fabulous looking hotty whose cover picture on the lower right corner of the front cover did not do her justice, ended the movie in a scene with James Deen, a man best suited/known for his comedic work in features. He was ill and on the couch and she was his nurse, his overactive imagination watching her sweet ass walk around the home to start him fantasizing. While the scene was a far, far cry from her work in Raw 15, I thought she looked smoking hot in her crotchless pantyhose and revealing black top, her ass and other body parts adding some replay value for me. She blew him briefly before some vaginal positions ensued, Karlie a passive rider until the very end when she bounced on his rod vaginally, her loss of breath a bit overdone but this being a fantasy scene with her on the white couch, pretty much any Karlie with a guy is a treat. There was a bit more oral and she gave good eye contact until he bust a nut of sperm on her tongue, the gal savoring the taste as the camera panned her delicious body.

Amy Anderssen, Manuel Ferrara: Amy Anderssen, the incredibly curvy young brunette featured on the front cover, was up first as she walked into the motel room in a skin tight blue outfit. Manuel Ferrara was taken aback by how ginormous her tits and ass were, Amy posing before they bantered back and forth verbally. To say she left an impression on him would not go far enough, Manuel wanting to take some stills of her in what rarely happens in the series, the man admitting he had been jerking off to her scenes for some time. She posed on the bed and slowly took off her clothing, her boobs looking too out there for my tastes but that ass was to die for. Manuel started working her over by stuffing his face between her ass cheeks, her ripe rump causing the growing bulge in his pants to become a turgid pecker in record time, Amy aurally encouraging him to gobble her gash and eat her ass as he nestled between her legs both front and back. This led to her providing him with an energetic blowjob, titty fucking and rubbing driving him crazy as she licked his shaft and slobbed the knob seductively. There was some hand to gland friction included along the way but her eye contact was really strong and she knew how to tease him using her ass cheeks to rub his erection ever so slowly. The vaginal penetration showed both of them to actively participate, more oral and titty play keeping him on edge to explode as she rode his cock really hard. There were numerous times I thought he’d lose his genetic juice early but he held out valiantly until the ending wave of pleasure forced his balls to unleash his baby batter all over her torso.

Kayden Kross, Manuel Ferrara: Kayden Kross, naked on the bed having warmed up in the lesbian scene before this, was then joined by fully clothed Manuel Ferrara, the two kissing as his oral efforts continued southward down her body. Even Kayden licked her own nipple as he encouraged before he flipped her over to rim her at length, his own playful swats causing her to over react a bit again, his attention on fingering her ass as he went down on her more aggressively than Bree had working for the gal. Kayden then jerked him off and took the top part of his head into her mouth, moving to toss his salad before he fucked her pussy. She gave the same limited hummer after that position to move on top of him for a relatively passive ride, Manuel playing with her ass a little and spanking her to leave marks before choking her in missionary. Kayden looked good but compared to the previous acts he was in, the reliance of looks over performance struck me as a bit weak, her titty fucking leading to another partial blowjob where her eye contact helped as she stroked him rapidly while her mouth serviced the very top of his cock only. He went back to banging her as she rubbed herself, their chemistry established by their whispers and looks at each other, his sheer size again too much for her to easily handle before he nutted on her face to close her eyes with his liquid goodness.