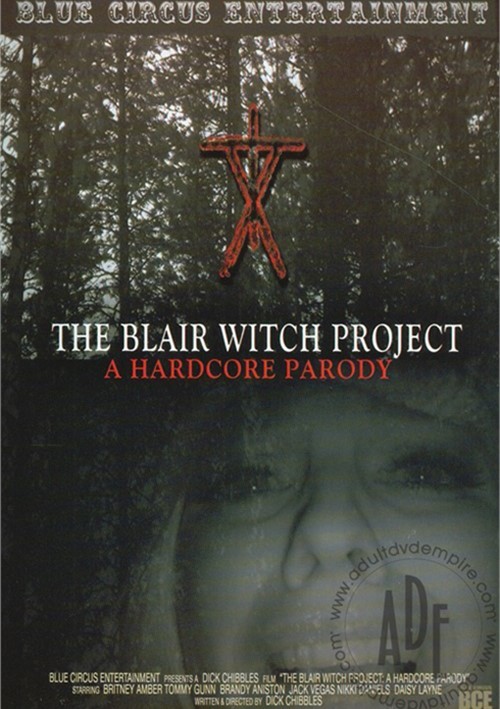 The plot of this is basically the same as the plot of the original – in 2010 a group of adult filmmakers go into the woods to shoot a porno movie in the rural area of Maryland. They’re also working on a documentary about the Blair Witch as well. OK. So at any rate, they go into the woods and film one another fucking and sucking and then strange things start to happen and they wind up lost and being pursued by some unseen evil force. Completely inconsistent in how it switches back and forth between what appear to be legitimate attempts at making a scary movie and some groan inducingly bad comedy The Blair Witch Project:A Hardcore Parody winds up doing neither very well – but hey, it’s a hardcore parody, right? If the sex is good enough, we can overlook this without any problems whatsoever – so let’s take a look at that aspect of the production, shall we?

Scene 1 – Britney Amber, Nikki Daniels, Tommy Gunn: Playing the ‘Heather’ character from the original, Ms. Amber is the leader on this outing and she decides before they head out into the woods that fucking Tommy Gunn would be a good way to warm up for the project. Since Tommy wants to get some footage under wraps before they split, he’s game and Nikki Daniels shows up at just the right moment to get in on the action. This is a fairly typical guy with two girls scene – Tommy pokes away at the two of them, they take turns sucking his cock and occasionally play with each other. The emphasis here is on taking care of Tommy though, so despite the fact there’s a lot of finger fucking on the part of our two ladies (gotta love the dark hair/light hair contrast they provide!) it’s not as hot or as sincere as it could have been. Regardless, Tommy blows his load across Amber’s pussy and Nikkie dutifully licks it off to finish the scene, always a nice touch.

Scene 2 – Brandy Aniston, Daisy Layne, Hef Pounder: After running into a creepy farmer and discussing the legend of Coffin, err… Casket Rock ad naseum, they get out of the van and head into the woods Amber reads from a book that details the legend while nearby Brandy and Daisy double team Hef and suck his cock to get him primed. He goes back and forth between the two ladies and takes his time fucking them each from every angle you could want, though with doggy style seeming to be the most effective. Daisy definitely seems as into Brandy as she is into Hef, if not more so, which is nice to see. He blows his load onto Brandy’s tits with a nice handjob from Daisy to close the scene.

Scene 4 – Brandy Aniston, Tommy Gunn: After some hiking and wanting to get away from the pressures of being lost in the woods in the middle of nowhere, Tommy and Brandy decide to release some pressure with a good fuck. They find a nice clearing in the woods with a conveniently placed rock and before you know it Brandy is on top of it and Tommy’s worked his way in between her legs. She strokes him and sucks him and he pumps away at her and they’ve set up a camera nearby in the grass to capture the action, which is mixed up with POV shots. It’s not that great a scene, but it is at least creative from a technical standpoint. Tommy finishes the scene off with a pop shot to the mouth.

Scene 5 – Brandy Aniston, Britney Amber, Daisy Layne, Nikki Daniels: As the pressures of being lost in the woods mount, the group sets up camp for the night and the next morning when everyone wakes up, the girls are all in the tent together. Jack Vegas sees them there and figures, hey, every porno movie needs an all girl scene, and who am I to look a gift house in the mouth? The cameras roll and the ladies engage, taking their sweet time licking and flicking and sucking and fucking. For some reason some of this is in color and some of it is in black and white, which doesn’t make any damn sense at all. The scene is too short to really amount to much.

Scene 6 – Britney Amber, Nikki Daniels, Hef Pounder, Jack Vegas: Last but not least, after a bunch of bickering about maps and being lost, and after spending a night in the tents hearing Jack screaming out in the woods, everyone wakes up and these two girls settle down with these two guys in a clearing in the woods for a little foursome to bring the movie to a close. Nikki works the camera at first but soon somehow ends up in the action too? Ok. At any rate, the guys have their way with the ladies, it’s all pretty standard stuff and not particularly well shot or logical in a contextual manner, but it ends with the guys blowing their respective loads onto their respective partners and the girls do a big gooey cum swamp at the end. Well, the end of the sex scene at least – the ‘story’ wraps up with Britney finding Tommy’s cock severed from his body in the woods and then voyaging into a cabin they find in the woods. If you’ve seen the original, you know where it goes, only this time around the acting is terrible and what should have been an eerie finish instead comes across as being played for laughs.